Kim Collins is a multi-instrumentalist in her Nasvhille duo The Smoking Flowers, a classic country/pop outfit that pulls at your heartstrings in one song and gets you out on the dance floor the next. 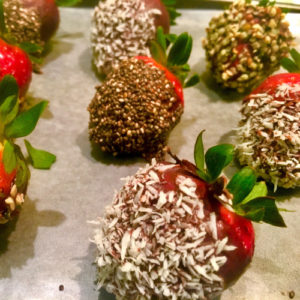 Kim’s also got the foodie bug, and she’s lending her healthy take on gourmet to our May box. We’re lucky she had time between working on her new album, running her very cool health blog, having shoulder surgery (!!), and curating Lotus Eye Interiors, her vintage rug and interior design company. Somehow she even had time to answer our interview! Check it out below, followed by a video from The Smoking Flowers.

Culinarie Kit: What inspired your love for cooking?
Kim Collins: In my case it would be a “who”. My mother. I’ve been around homemade cooking my whole life. But it wasn’t until I left home and decided to go all-natural with my life, including eating a vegetarian diet, that my cooking talents were really discovered. I had to cook for myself because in the south in the 1990’s there weren’t many healthy options. We did have two vegetarian restaurants in Nashville and one health food store though, which isn’t bad for that era!

CK: Do you have any professional cooking experience?
KC: I am a raw food, whole food and cancer diet at home cook, speaker and advocate. I get asked to do private events. But other than that, I don’t consider myself a “professional”. It’s more a lifestyle and passion for me that I love to share through my blogging or private and social events.

CK: What’s your favorite music to listen to when you’re in the kitchen?
KC: Chopin! Or old French music. Or even Opera.

CK: What’s the best meal you’ve had on tour? The worst?
KC: I have 2 bests:
I am a breast cancer survivor and cured my cancer holistically. This included cleaning up my diet and I went on a raw food diet for the first year of healing. When on tour, it was difficult, but not impossible to maintain my diet. But one festival we played deep in the North Woods of Wisconsin there was absolutely NO food for the bands! And the only thing they had on the premises was a microwave pizza in the cabin lodging. I was soooo hungry and was not prepared for this mishap so I ordered the pizza after being on a strict vegan (and no bread) diet for almost 2 years. I sat down with the pizza, looked at it, blessed it for my nourishment, and chowed down. It was the best pizza I ever had!

We met a badass chef (Justine Zegna) at a show in Maryland who owned a few restaurants. She took us in and fed us after our concert late one night. An amazing home cooked healthy vegan meal. I wish I could remember the details of that first dinner. Every time we tour in her city she has amazing food she makes for us at her home.

The worst? So many. Lol. Seriously, a lot of the bars we played had typical grease pit food. I end up getting the French fries.

CK: Name your favorite dish to cook. If it had a theme song, what would it be?
KC: My vegan Bolognese dish! It’s so hearty and I slow roast seitan as the meat replacement. Even meat eaters freak out over this dish. I guess the theme song would be something French of course, by Edith Piaf. Or Jane Birkin!

CK: What’s the weirdest/most creative way you’ve eaten on the road?
KC: I don’t know if I would consider this creative, but it was definitively the most memorable (almost orgasmic!) experience. We were playing in Seattle and took a fellow musician on the road with us sharing the bill, and he knew a fishmonger in Pike’s Market. On our way out of the city to head up north we popped in and the fishmonger threw us a freshly caught and smoked salmon that was the size of my thigh! I was still currently vegan/raw in my diet however (*sigh). So we took off on the road and I could smell the goodness in the van permeating. We had no forks or anything for the boys to cut this huge piece of salmon so they began just eating it barbarian- style with their hands… digging in like starving animals, letting the salmon juice drip down their faces. They were oohing and awing and I said, “Screw it!” and dug in because I couldn’t take their praises anymore! It was single handedly the most amazing fish (or any food for that matter) I have ever put in my mouth. We scarfed downed that fish like we haven’t eaten in a month. And the barbaric style was what made it that much more visceral and heavenly. 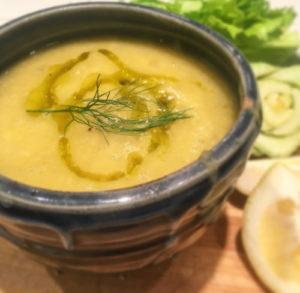 CK: If you could have anyone cater your next tour, who would it be?
KC: Justine Zegna! She owns a great restaurant in Berlin, Maryland called The Black Smith (and before that she owned the popular Planet X vegetarian restaurant in Rehoboth Beach). She’s a punk rocker musician from the original punk scene in DC and is a remarkable woman on many levels. It’s got to be family for me on the road.

CK: If you could cook dinner for anyone, who would it be?
KC: Leonard Cohen (if I could bring him back). Because, well, I just want to have dinner with him and I think he’d appreciate my take on the art of cooking because he was pure art.

OR more bringing back of the past:
Chopin, Beethoven, Edith Piaf, Billy Holiday, Salvador Dali. That would be the ultimate dinner party.

Living? Barack Obama. Because damn, that would be cool.

Checkout The Smoking Flowers’ beautiful live video for “Left of the Dial” below. Want to get Kim’s recipe along with a box of unique, artisan ingredients? Use coupon code KIM to reserve your Culinarie Kit before 5/12/17, receive the May Music Box, and save $5!

One Reply to “Kim Collins: May Music Box Guest Chef #5”